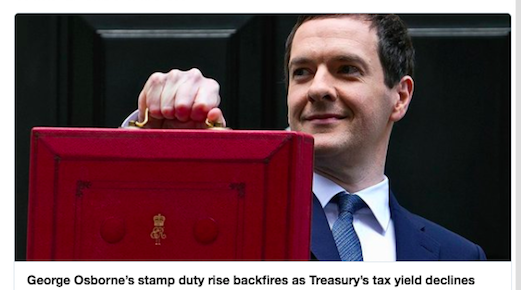 on August 6, 2018by amyin Uncategorized

Former Chancellor George Osborne, the man who devised the unpopular stamp duty reform, has come out of hiding to defend the tax reforms after years of keeping quiet.

His re-appearance in the stamp duty spotlight came in the form of a tweet over the weekend in which he emphatically criticised a story in The Times reporting the reduction in income for the Treasury from stamp duty in 2017.

“The article completely fails to mention that the changes involved a reduction in stamp duty for over 95 per cent of families, and the removal of the slab system which the Office for Budget Responsibility correctly expected would cost revenue – ie, it was a tax cut” tweeted Osborne, who has become editor of the Evening Standard in London since quitting his role as as MP..

Osborne’s return to the spotlight over stamp duty follows figures, reported by Estate Agent Today and in most industry and mainstream media outlets, that the current Conservative government is collecting less stamp duty revenue overall than before the changes were introduced by Osborne in December 2014.

Some £1.987 billion was collected as stamp duty the second quarter of this year in England and Wales: as recently as the the third quarter of 2015, six months before the introduction of the three per cent stamp duty surcharge for additional homes – revenue from SDLT was £1.999 billion.

The Times on Saturday reported the story saying “George Osborne’s tax increases for the wealthiest home buyers backfired” and “the government is collecting less stamp duty overall than before the changes were introduced by Mr Osborne.”

Last week HMRC stamp duty statistics for the second quarter of this year, analysed by property advisers London Central Portfolio, suggested that receipts for the April/May/June 2018 period were down 13.8 per cent, or £317m, from the same period of 2017.

However, Osborne’s tweet suggests this was the plan all along.

“This article completely fails to mention that the changes involved a reduction in stamp duty for over 95% of families, and the removal of the slab system, which the OBR correctly expected would cost revenue. Ie it was a tax cut …”

Until Osborne’s surprise announcement in a Budget on December 2 2014, HM Revenue & Customs used a ‘slab’ system – if a home fell into a particular stamp duty band the entire cost of it was taxed at the related rate.

This created big jumps in duty when a buyer crossed a threshold. For instance, a home costing £249,000 attracted duty of £2,490 while one costing £250,001 attracted more than £7,500 in duty. Agents had long argued that they wanted this ended.

At the time of Osborne’s 2014 announcement, the change meant that anyone buying a house costing less than £937,000 – about 98 per cent of buyers, would pay less duty; anyone buying a more expensive home would pay more.